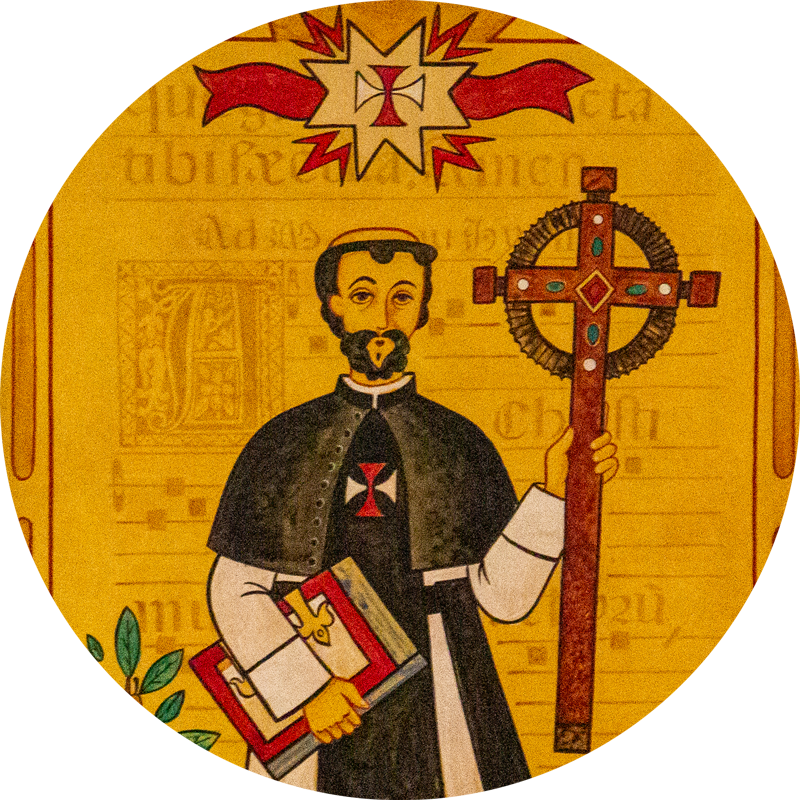 The Order was founded in 1210 by Blessed Theodore de Celles and his companions.

The name Crosier is derived from the French word croisés, which means signed with the Cross. In medieval England, Crosiers were known as the Crutched (crossed) Friars. The designation refers to the Cross and the spirituality of the Order.

Our primary feast day is the Exaltation of the Holy Cross, which reflects a spirituality focused on the triumphant cross of Christ and our glorified Lord. A distinctive mark of the Crosiers is the red and white crusaders’ cross worn on the scapular of our religious habit.

The Order’s history can be divided into three periods. 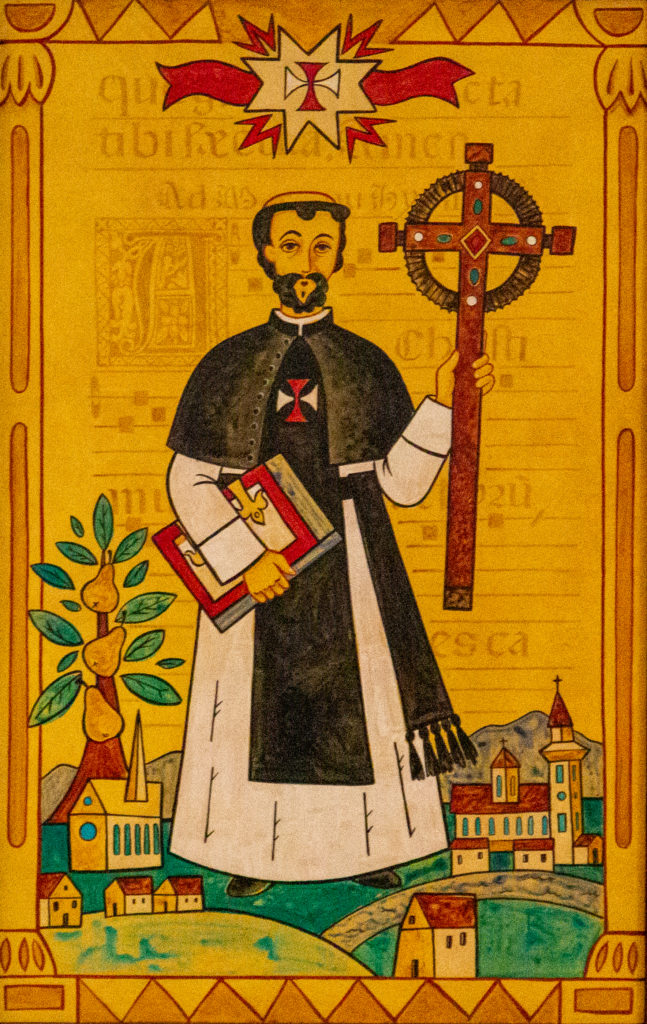 The first period of Crosier history, during medieval times, was one of growth.

Blessed Theodore and four companions came from Liège in Belgium and formed a community near the city of Huy called Clairlieu. They were influenced by the fraternal life movement in the Church at the time that led to the founding of the Franciscans, the Dominicans and the Carmelites. Their vision was to live a life of prayer and pastoral service as brothers inspired by the spirituality of the Holy Cross. Adopting the Rule of St. Augustine, they established other communities, serving churches throughout Europe. At one time there were as many as 90 Crosier communities. Crosiers were involved in the running of inns for travelers and those on pilgrimage. While the motherhouse remained at Huy for much of the Order’s history, there was also a significant Crosier presence in France (Paris and Toulouse), in the Rhineland (Cologne), in England (London) and in the Low Countries. 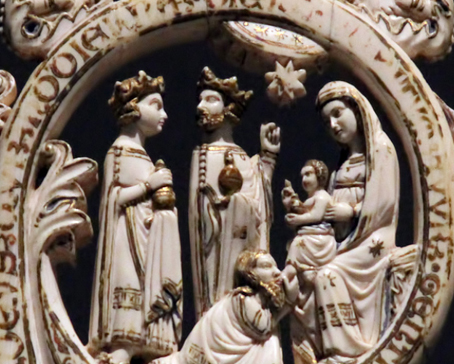 The second period of the Order’s history was ushered in by a reform initiated at the 1410 General Chapter.

This reform, influenced by a spiritual movement called the devotio moderna, was spearheaded by the Priory of St. Agatha in the Netherlands and was typified by a very personal devotional spirituality. While the house at Huy remained the motherhouse, St. Agatha became the spiritual center of a reformed and revitalized Order. During the Protestant Reformation, many Crosier priories and churches were suppressed, and under Henry VIII all the houses in England were confiscated. By the end of the 18th century, the French Revolution and the subsequent Napoleonic reforms further reduced the number of Crosiers. By the early 1800s only two priories remained, St. Agatha and another in Uden, also in the Netherlands. By 1840, because secular authorities had forbidden men to join, only four elderly Crosiers remained. 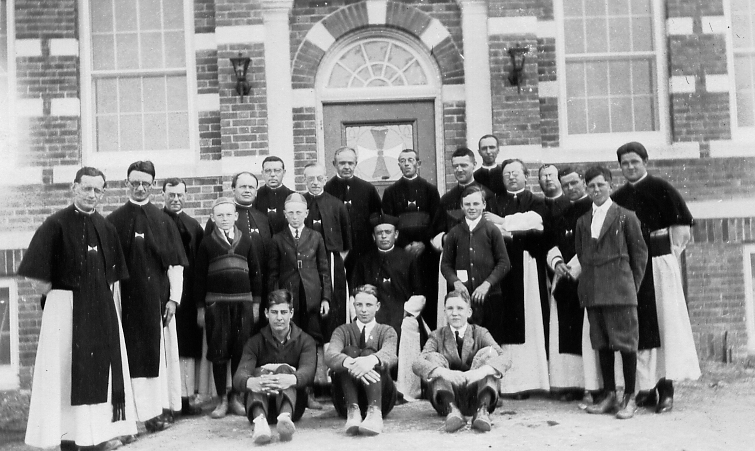 The modern era began in 1840 when the law forbidding the reception of new members was repealed and surprising numbers joined the Order, some of them diocesan priests who believed all along they had a call to religious life.

The modern era began in 1840 when the law forbidding the reception of new members was repealed and surprising numbers joined the Order, some of them diocesan priests who believed all along they had a call to religious life. Henricus van den Wijmelenberg was one of them. Before long, this new Crosier was appointed superior, and then, in 1841, he was named Commissary General of the revitalized Order. Houses were reestablished in Belgium and the Netherlands and beyond.

In 1850 Fr. Van den Wijmelenberg sent priests and brothers to Wisconsin to work among the Dutch and Belgian immigrants who had settled in the Green Bay area. Along the Fox River, Fr. Edward Daems, osc, tried to establish a priory, but plans were abandoned when the Civil War began. A second attempt to establish an American presence by the Crosiers came in 1910. In 1922, a priory and school were established in Onamia, Minn., 90 miles north of Minneapolis. At the same time, men were sent into other parts of the world as well, beginning missions in the Belgian Congo (now the Democratic Republic of the Congo) in 1920; sending Crosiers to the island of Java in Indonesia in 1926; and, in 1934, establishing a presence in Brazil. Since 1958, Crosiers have worked in the Diocese of Agats-Asmat in the West Papua region of Indonesia.

Today, the worldwide Order of the Holy Cross has communities in Austria, Belgium, Brazil, Congo, Germany, Indonesia, the Netherlands, and the United States. There are about 400 Crosiers throughout the world. The residence (Generalate) of the Master General is in Rome, at the Church of San Giorgio in Velabro, a seventh-century basilica the Order has cared for since 1939.

Crosiers in the United States

The Conventual Priory of the Holy Cross is the U.S. headquarters of the Crosier Fathers and Brothers. Ours is the only religious community with national headquarters in the Diocese of Phoenix. We also have a significant presence in Onamia, Minnesota, where the Crosier filial priory serves as an active and dynamic hub of spiritual life in the poorest county in the state.

The Crosiers' national headquarters in Phoenix

The Crosier Community of Phoenix was officially established in 1983 although individual Crosiers had already been serving within the Diocese of Phoenix. At the time, the Phoenix Crosier community was relatively small, comprised of elder Crosiers who assisted in several parishes. We recognized there were more ways in which we could serve the diocese and the people of Arizona, particularly the elderly and ethnic communities.

To confirm our desire and commitment to develop a thriving permanent presence in Phoenix, we purchased property on Campbell Avenue near 24th Street where our members resided and worshiped.

In 2000, the Order began consolidating the smaller Crosier communities throughout the United States to build two vibrant communities in Onamia, Minnesota, and in Phoenix. Having communities in Onamia and Phoenix provided the perfect balance of rural and urban, offering established history and a place where new ministries and the needs of the larger community could be nurtured and met. The consolidation gave our members an environment in which to share a regular and daily rhythm of coming together for prayer, fellowship and service. It also allowed the opportunity for outreach and service to the broader communities where we lived.

During the summer of 2007, the Crosiers moved the national headquarters to Phoenix.