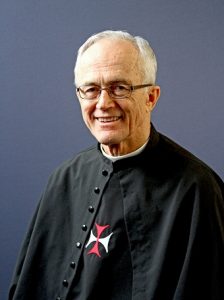 Br. Robert “Bob” John Mandernach, osc, was born Feb. 14, 1939, in St. Martin, Minnesota, to Peter and Catherine (Lieser) Mandernach. He was one of thirteen children.

Many of his assignments and ministries centered around Crosier Religious Life as a member of the Crosier communities in Hastings; Fort Wayne; Syracuse, Indiana; Shoreview, Minnesota; and Onamia. Br. Bob faithfully served the Crosier Fathers and Brothers through construction, maintenance and farming as well as serving as a coach and dean at Crosier Seminary and as subprior of the Crosier Community of Hastings. From 1993–95, he lived in Mulo, Democratic Republic of Congo, as a missionary. Br. Bob later worked as the engineer’s assistant and campus and facilities director at St. Odilia Parish in Shoreview. He served in priory maintenance for many years in Onamia until his retirement in 2017.

He is survived by siblings Br. Michael, CSPX; Sr. Leonore, OSB; Sr. Margaret, OSB; Sr. Mary, OSB; Cyril, Lillian Smith (James, deceased); John (Dianne); as well as his Crosier confreres in Onamia and Phoenix and around the world. He is preceded in death by his parents and his siblings Joseph (Monica Buerman); Teresa Dingmann (Albert); Laverne; Albert; and an infant sister.

The Mass of Christian Burial for Br. Bob will take place at 11 a.m. Saturday, July 24, at the Crosier Priory in Onamia, Minnesota, with vigil and visiting beforehand. A luncheon will follow. A private inurnment is planned for the priory cemetery columbarium.